Posted at 01:39h in PAST EVENTS by admin

That original Cigars line-up brought together four like-minded experienced players, all veterans of Sydney inner-west blues venues, and from the word go, as the 1990 tracks demonstrate, the Cigars have been the very model of the ‘no passengers’ band, a well-oiled machine plus soul: no room for slackers here. Always one of the country’s hardest working outfits (on the road more than off), the Cigars have kept their music tight, hard-driving and down – to – earth: the Australian bar band par excellence.

Apart from the timeless, unpretentious nature of the music, an obvious reason for the longevity of the Cigars must be the ongoing musical team work of 2 foundation members, Shane Pacey and Al Britton, who continue to co-lead the band. This also explains the consistency of the band’s sound, instantly recognisable for 17 years now, despite personnel changes and occasional stylistic variations. Front man Shane Pacey has long been a forceful, convincing singer, and a hard-attacking, razor sharp guitarist in the modern blowtorch style of Albert Collins, Joe Louis Walker, Larry McCray and other crazy stringbenders; he’s also an outstanding prolific songwriter, and there’s ample evidence in these tracks of his sardonic, savvy and slightly warped way with lyrics.

Bass player Al Hollywood Britton is another blues trooper, having survived the Dynamic Hepnotics and the Foreday Riders, and puts real backbone into the rhythm section – rock solid, responsive and funky; what’s more, he’s a dab hand in the organisational department, playing great lead telephone, according to the credits of Mercy (1998).These dual father – figures have kept the music tough and vigorous by usually recruiting new members from Sydney’s inner-west breeding grounds of exciting young R&B/roots bands.

The first 2 Cigars albums had featured the original line-up, but after the departure interstate of Les Karski and Ace Follington, the next CD ‘Got The News’ (appearing under the name Shane Pacey and the Cigars) included hot young Adelaideians Clayton Doley on keyboards and Matt Morrison on drums, both also associated with Robert Suez of Mighty Reapers fame. ‘Got The News’, expertly produced by Sydney funky/soul boss Jackie Orszaczky, and the Cigars sound was further spiced up by the precision horns of Paul Panicci and Andrew Robson.

By 1995, with the release of ‘After Closing Time’, 2 fine new Cigars had been press-ganged from the youthful but punchy Balmain R&B band The Beefs: Mitch Grainger (guitar/harmonica) and Declan Kelly (drums), who have both since moved on, but remain active in Sydney’s roots/funk scene.

The following album ‘Mercy’ saw the introduction of drummer Andrew Vainouskas, plus on guitar and vocals Eben Hale, ‘the second-best left handed guitarist in the band’ according to Shane; Eben has remained a paid – up member to this day. Since then, the only changes have been on the drum stool: Frank Corby and Joel Sutton.

2004 saw the band release their eagerly anticipated 7th album, 12 Lies, an album hailed as their best yet. Along with the mix of rhythmic, rootsy grooves and flavours of blues, soul, funk and R&B that fans have come to expect, this album saw the band branch out even more, with some tracks having an “alt country” feel, and others more pop rock than blues and roots based. The response from fans and critics alike was fantastic, with the band winning Best Group, Best Album and Best Producer at the 2004 Australian Blues Awards.

The Cigars have consistently delivered the goods; with Down In The Valley nominated in the 2003 ARIA awards for Best Blues & Roots Album, 1995’s After Closing Time awarded Best Blues Album at the 1996 Lithgow Blues Festival, and two of their songs, Lead Me Not Into Temptation and Intensive Care, chosen to feature on the popular ABC Seachange album. 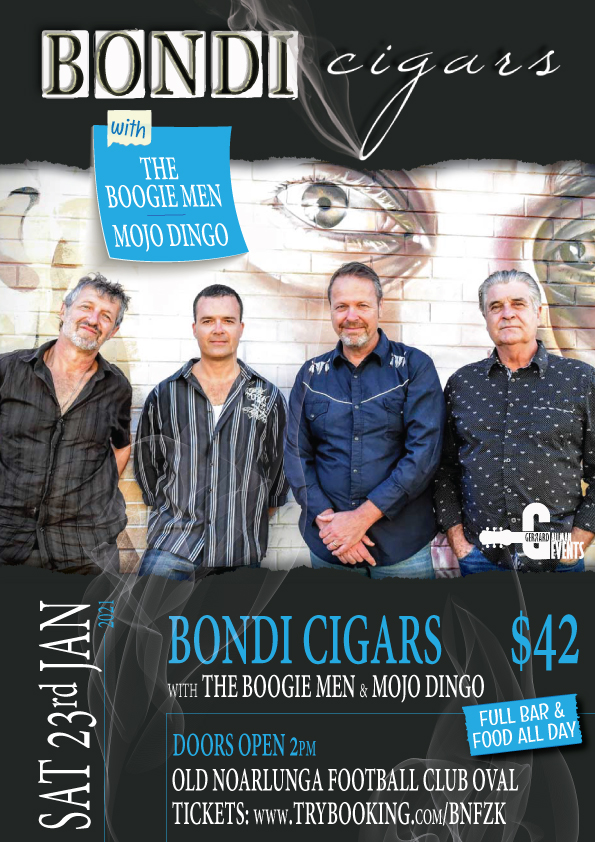